How To Make Yourself Want To Exercise

I promise there is a point to this blog post but I wanted to tell a story first. From the age of 8 till the age of 22 I danced and that was my exercise. I didn’t have to think about when I would fit it in or what I was going to do. I knew that I would have classes this many times a week and I would have to do my own practice on these days and there was no option not to do it. When I finished dancing it made me realise that it wasn’t so easy to exercise regularly when I didn’t have this structure. In the last year I wouldn’t say that I have been inactive I just haven’t exercised as much as I would like to. I have been going on runs and I joined a gym but nothing was consistent. I would be feeling enthusiastic for a week and then do nothing the next week.

In the last few weeks of being in the US my boyfriend organised a membership at the gym he was working for and he wrote up a program for me. Even with all of this it took an immense effort for him to actually get me into the gym. I would make excuses not to go, be sluggish and hard to get out of bed, convince him that it was too cold for us to go (granted it was -20°C outside) and just be a general pain in the butt. I think it was because I had in my mind that I didn’t like exercising in the gym. Them main reason for that I realise now is because I had no idea what to do with the majority of the machines and weights. Well when I was shown how to use the gym equipment and started working out I enjoyed it. It felt good to be doing something.

A similar thing happened when we got back to Australia. I resisted getting started back in the gym for the first week but since I have been back into routine exercise I feel happy with myself and I’m loving exercising again. I am excited to be getting stronger and fitter.

After that long winded story it brings me to why I wanted to write this post. I want to share what I have learnt about exercise over the last few months.

-The hardest part is getting there. Who hasn’t heard this? But it is so true. Once I was actually at the gym I was excited about exercising. A quote I have seen pop up on Pinterest sums this up. 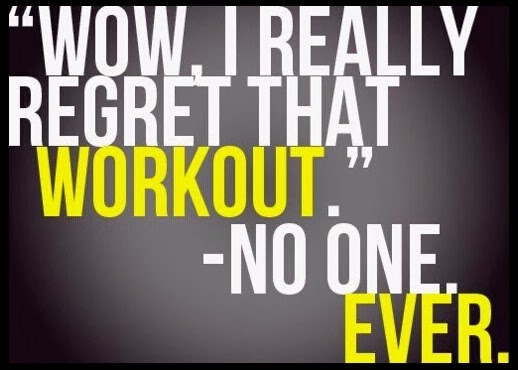 - Exercising with a friend or having a trainer helps to keep you accountable and motivated. I didn’t realise how much I missed exercising with people around like friends or my dance teachers. They were the people who made me turn up to dance class.

-Have a goal. It doesn’t matter what it is but if you have a purpose to exercise for it gives you a reason to schedule it into your life.

-Work out a structure that works to you and stick to it. Try planning out what exercise you want to do a week ahead and write it down so you are expecting it.

-Remember that exercise doesn’t have to be in a gym. It could be walking, running, yoga, dance class, boxing, rowing. There are so many options I don’t think anyone can say they don’t like to exercise because exercise is such a broad category. One of my sayings is that it is better to do something than it is to do nothing. So if all the exercise you can fit in that particular day is a brisk 20 minute walk then that is better than sitting in front of the television for 20 minutes.

I hope that I have actually given some valid points that aren’t just the same old things you hear every day. These are the things that have worked for me over the past few months so hopefully they can work for you too.

Email ThisBlogThis!Share to TwitterShare to FacebookShare to Pinterest
Labels: do what you love, Exercise, goals, motivation, structure, Tips